I had the opportunity to meet and have a wonderful conversation with Boston Red Sox Legend Ivan “Ike” Delock who pitched in the 1950’s & 1960’s.  Ike has some amazing stories about some of his teammates including Ted Williams, Jim Longborg, Vern Stephens, Walt Dropo and many more.  The one story that caught my attention is the importance of keeping the game simple going back to the basics to keep this game moving forward.  Now a days we are all caught up in the data driven world and baseball is no different but one thing that hasn’t changed is the basics of see the ball and hit the ball as well as catching and throwing.  He shared how Brooks Robinson was a great fielder as we all know and was referred as the “Human Vacuum Cleaner” but one aspect he said is never mentioned is Brooks didn’t have a great throwing arm but he rarely never misfired a baseball to first base.  His accuracy was pin point and if he didn’t have an accurate throw those plays he was known for would have never meant as much.  Being able to complete the play in the form of catch and throw was a big point Ike made during our conversation about Brooks Robinson. 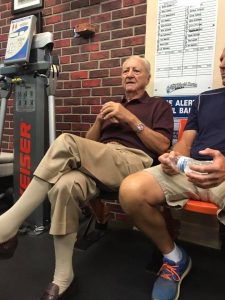 Ike also spoke about how Ted Williams always talked about keeping his head still and quite as he practiced constantly on picking up the pitch right out of the pitchers hand so he could have more time to wait on the pitch.  This is a value now a days that isn’t coached enough pitch recognition is the first part of hitting (seeing the ball) but is the last aspect and some times an aspect that is never taught in hitting.  You can’t skip step 1 and work on step 2 and expect to be a great hitter.  Thanks Ike for the great visit and conversation.