Why Is Ground Force Important To The Baseball Swing? 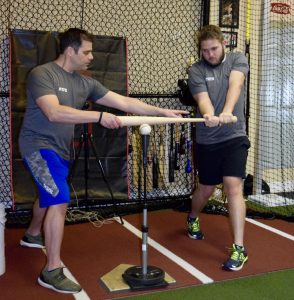 Ground reaction forces (GRF)  is not a new especially in the golfing industry but for the baseball world it is.  What is ground reaction forces?  To keep it simple it’s a way to measure one’s force that is produced in the ground thru a pressure mat to give objective data to the athlete and coach.  Why is measuring this important?  When we are performance movements we have 3 variables we are dealing with gravity, mass, and the earth.  These 3 aspects have an effect on our daily movements and when we are trying to execute a dynamic movement such as a baseball swing making sure we are producing enough force in the properly executed fashion is key for maximum performance.

Heat Maps: these are one modality that is used to measure ones  foot pressure into the ground and is shown thru the different colors which depict how much pressure is in that specific area of the foot.  Heat maps are great to show that athletes control during the movement.

COP/COF Center of pressure/force trace is depicting the center of the pressure in that given area of the movement.  We can see mass but feel pressure so this trace allows the athlete and coach see the sway aspect of the movement. Heal to toe pressure is also a measurement we can see to again dissect when and where the force is coming from during the actual movement.

DVF Dynamic vertical force is used to depict how much force that that athlete is putting into the ground which is vital because this is a great measurement of the power of that movement and in turn the execution of the force thru the kinetic chain of movement. (feet/legs/torso/arms).

Take Aways: It was really eye opening on how much my elite hitters dig this type of data after they began to understand it.  When they see the pressure mat in action with V1 Sports software it’s like the light went on in their head.  The biggest take away I got from my hitters was how much they didn’t realize went into evaluating ground reaction forces and many thought of it as just DVF (dynamic vertical force) and didn’t realize the sway (trace) and how important this really is to movement (hitting in this case) efficiency.  Heel to toe in the velocity graph also and when the heel should be have the higher DVF vs toe was a huge conversation piece.  Many of the best hitters put roughly 2x their body weight in force thru the swing from start to finish and allowing them to see this percentage was key as well and this allowed me to educate them on the control side (trail leg) vs the brake side (lead leg).  The control side gets the engine started as the brake side is the key to allow the athlete to decelerate effectively post hit.