LISTEN TO THE EPISODE ABOVE! (6 minutes) 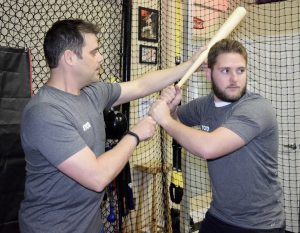 Podcast EP #26
I wanted to talk about some great things on concepts for elite hitting in baseball. There’s certain things that all elite hitters do to make them self great. And I’m going to start with the preparation. I’m going to start with the training and then finish with the in game adjustments. So when we’re talking about preparation, preparing their mind, not only their body, but training their mind prior to any competition, mental simulation, mental visualization very key. Make sure you see yourself hitting that certain pitcher that you’re going to be facing the following day. If you don’t know that information, it’s vital that you find that out. Need to have an idea and a visual that you can mentally simulate who you’re facing, exactly what they’re trying to do. Going back to game plans, games that you’ve played this team.

What did this pitcher try to do to you? Go over these notes. If you don’t have, you can’t depend on your coaches to create notes. One of the things JD Martinez does is he creates a hitting notebook. This is something that you have to do personally. Don’t depend on your coaches to have that. So going back in time and going through those. If you have video, you can watch. If you have access to a video room or a video personnel, this is when you want to look at that, review those notes, and get yourself prepared mentally. What is going to be happening? What their plan might be, okay, and visually start seeing yourself execute the plan that they’re going to probably be producing for you. So that’s the first. The second thing is the training. Are you training properly? Purpose of training is to get the body ready for competition.

It’s not going to look good in practice. It’s to get the body ready and the swing ready for game competition. Nobody cares what you do at five. They care what you do at seven. So what you need to do is you need to make sure you’re facing other pitches than just meat balls down the plate. Fast balls that are just slow in BP. I’m not a big fan of that. You need to bring the game style in. You need to bring off speed into the equation. Work on if it’s a lefty, throwing, have a lefty throwing at you before the game, get the body ready for that. The visual side ready for that. The right handed do that. Submarine, same thing. You need to try to emulate what’s going to be coming to you. Off speed is the biggest, important [inaudible 00:02:36]. When we’re talking about BP before game, you can’t just hit fast balls.

You’re not going to just face fastballs. One of the hardest pitches to hit it is an off speed pitch in my opinion is the change up because they eyes can’t pick up that as well. So work on the hands staying back, driving the ball to the left center or right center gap, really executing the slow movement on the front side. The front side is slow controlled, and then as we get to the ball gets into the hitting zone, you becoming violent. That dictates the whole swing, the front side. So working on these things and working on getting your ball elevated, getting a good pitch playing. Pitch playing, getting good launch angle, all those things, but finally, make sure they’re throwing… If they threw your some fastballs, throw at game speed. Don’t throw batting practice speed. Game speed fast balls.

Okay. Now going into in game preparation. Great players and great hitters make adjustments in game. You can’t come in with a plan and not be able to adjust that plan based on what you’re seeing and what’s going on. You have to be very, very efficient at adjusting in game on the fly. So this is one of the most important things I’ve seen. The best hitters, they do the first two, and then they don’t do this so well. So they’re making adjustments the second at bat, third at bat, are you’re going to be able to adjust to what they’re going to be doing based on what you did the first at bat? These are so important. If you aren’t making adjustments, you are not going to progress up the levels in this game because teams, the best players, the best organizations are using so much data that they can adjust any time based on what they see and what they have in front of them on paper. You have to be as efficient to that.

You have to step up to that plate for that. If you’re not, at some point, it’s going to catch up to you. So making in game adjustments, meaning if you hit a breaking ball and you hit a solid line drive first at bat, you’re probably not going to see that location and pitch again. However, you’re always ready to do damage. Okay. You’re already ready to do damage on a certain pitch until two strikes. So if they leave that over the plate and make a mistake, you have to make sure you make them pay. Okay. So these are three things that I really want you to focus on. Short, simple, efficient, effective, not going to make this long and drawn out.

Make sure you do those three things. Those are three concepts that all elite baseball and softball hitters incorporate into their game. For more information, go to ricksaggese.com or thinkoutsidethediamond.com. Visit some of our blog posts. I’ll be posting more of these as well.